Inauguration of “The Hollow Men” Monument 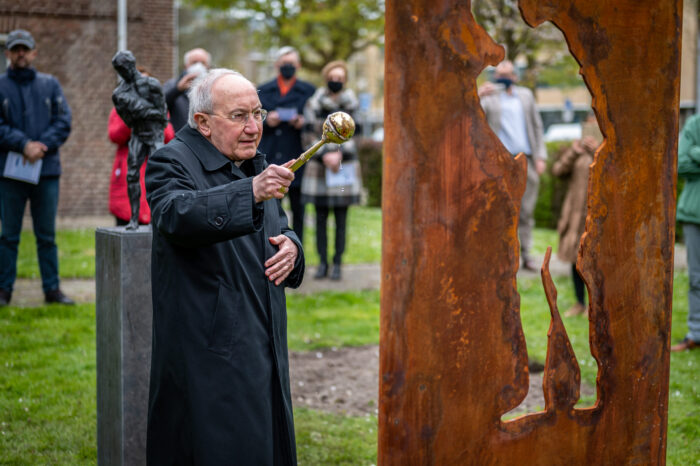 On Sunday, 25 April, a sculpture entitled “The Hollow Men” was unveiled in our church garden to commemorate all the unknown refugees who died at sea or in the desert during their flight to safety.  The sculpture consists of two parts, and when viewed from the Bezuidenhouitseweg side, the statue is visible through the center of the metal cut out figure in front.  The Papal Nuncio can be seen here blessing the memorial.

It was a moving ceremony.  The statue was unveiled by Wael, who was himself a refugee. The Papal Nuncio, H. E. Mgr. Aldo Cavalli, was on hand to read Pope Francis’ Prayer for Immigrants and to bless the monument. Speeches were made by Kees Zevenbergen, Director of Cordaid who funded the project, Linette Dijk, the artist who made the monument, and Mehran Ward, a representative of the refugee community.

"Today’s altar flowers are dedicated by Paul and Jacki Donellan, “In thanksgiving for the many blessings received...

If you would like to sponsor the altar flowers for any special occasion (in memoriam, wedding anniversary, birthday)...